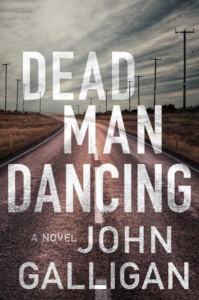 Galligan’s dark, painfully relevant Bad Axe County was one of my favorite thrillers of last year, and Dead Man Dancing sounds like a powerful follow-up.

In this sequel to the “gritty, brash, and totally gripping” (The Real Book Spy) thriller Bad Axe County, Sheriff Heidi Kick is investigating an illicit cage fighting ring with ties to white nationalism when her husband suddenly goes missing.

It’s a time for celebration in Bad Axe County as the town gathers for the annual Syttende Mai—or Norwegian Independence Day—festival. During this rollicking family-oriented event filled with dancing and food, Sheriff Heidi Kick discovers a dark and shocking event—a migrant worker has been savagely beaten but refuses to explain what happened. Then, a sudden murder of a band member shatters the festival. Something is deeply wrong in Bad Axe County.

As she looks for answers, Heidi plunges into a secret underworld where high-stakes cage fights double as combat training for the White Nationalist movement. Then all hell breaks loose for Heidi when her husband disappears and her enemies try to force a desperate bargain.

A timely portrait of the deep divisions and simmering tensions brewing in our country today, Dead Man Dancing takes you into the dark heart of a movement defined by violence and hate. Featuring John Galligan’s signature “striking prose, engaging characters” (Kirkus Reviews, starred review), and unforgettable twists and turns, Dead Man Dancing is a breathless thriller that will keep you on the edge of your seat.

… bring your knowledge of current events because Galligan ripped the pages out of a bunch of news magazines to make this book relevant, and as fresh as country air. Bring a bookmark, though you probably really won’t need it.

Hey, what are you still doing here? Why aren’t you out getting “Dead Man Dancing”? You should, you know. It’s a perfect chance to relax between river and prairie, near bluffs and coulees, and … a sleep-deprived Sheriff who loves her town and her neighbors. Indeed, despite that Bad Axe County residents seem both backward and forward-thinking, author John Galligan plays his characters like a tuba — loud, dexterously, and with a deep breath — making it hard not to want to visit Farmstead yourself.

Given current tensions and deep divisions in the United States, Dead Man Dancing takes on an electrifying relevance made all the more effective thanks to Galligan’s vivid descriptions and emotional portrayal of his characters.

Galligan juggles the multiple plotlines without ever straining credibility. Ace Atkins fans should be drawn to this gripping account of an honest law enforcement officer battling racists

Summer is a great time to pick up a mystery. Madison’s John Galligan knows how to write good ones; plus, he sets them in southern Wisconsin. – Isthmus

Heidi Kick was interim sheriff of this seedy Wisconsin territory. Now she’s full-time, sounding like somebody with a job. She fights with the payroll department over time off, and she’s undermined by big-bellied old boys who call her Sheriff Snowflake. … Some fine action scenes result, sparked by one outlandish villain: “I melted the snowflake,” he brags after throwing acid at a woman. “Hydrochloric justice.” Heidi doesn’t want any more of this scoundrel, but his presence certainly shifts the novel into overdrive, the way only a truly despicable villain can do.

“Crime in the Heartland: How Fiction Can Be Truer Than the Truth” hosted by Menasha Public Library

Arcadia Books hosted this conversation via Zoom, here is the video.