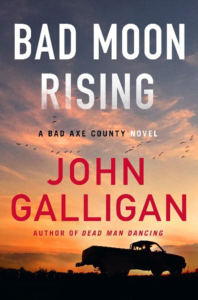 As unique a place in the mystery universe as you will ever find…smooth, unexpected, and memorable. This book is a diamond in the rough.

A record heat wave suffocates remote rural Wisconsin as the local sheriff tracks down a killer hidden in the depths of the community in this atmospheric, race-to-the-finish third mystery in the Bad Axe County series.

Sheriff Heidi Kick has a dead body on her hands, a homeless young man last seen alive miles from the Bad Axe. Chillingly, the medical examiner confirms what Sheriff Kick has been experiencing in her own reoccurring nightmares of late: the victim was buried alive. As the relentless summer heat bears down and more bodies are discovered, Sheriff Kick also finds herself embroiled in a nasty reelection campaign. These days her detractors call her “Sheriff Mommy”—KICK HER OUT holler the opposition’s campaign signs—and as her family troubles become public, vicious rumors threaten to sway the electorate and derail her investigation.

Enter Vietnam veteran Leroy Fanta, editor-in-chief of the local paper who believes Heidi’s strange case might be tied to a reclusive man writing deranged letters to the opinions section for years. With his heart and liver on their last legs, Fanta drums up his old journalistic instincts in one last effort to help Heidi find a lead in her case, or at least a good story…

With simmering tension that sweats off the page, Bad Moon Rising infuses newsworthy relevance with a page-turning story of crime in America’s heartland, capturing global issues with startling immediacy while entertaining from start to finish.

As the pages turn, the author prompts readers to consider a range of timely issues (climate change, homelessness, corrosive wealth) via masterfully executed and action-packed storylines that coalesce in a shockingly memorable final act sure to leave readers eager for the next Bad Axe County thriller.

[S]uspenseful… Readers will root for Kick as the action builds to a satisfyingly hard-edged denouement. Fans of gritty rural crime, such as Ace Atkins’s Quinn Colson series, will be enthralled.

As unique a place in the mystery universe as you will ever find…smooth, unexpected, and memorable. This book is a diamond in the rough.

[A] compelling country noir in which a few good souls attempt to fight entropy.

Fascinating characters, a thoroughly original voice, and a riveting sense of place and atmosphere . . . Unputdownable.

Sheriff Heidi Kick is once again trying to bring some order and a semblance of law to Bad Axe County. Madison author Galligan has written another gritty, gripping addition to his series set in rural Wisconsin. Kick, as her name implies, strikes hard when she’s forced to. During a sweltering heat wave and a scorching re-election campaign, a homeless man is found dead after being buried alive. Kick must sidestep all kinds of nasty to solve the case.

Galligan’s latest ‘Bad Axe County’ novel is a heady combination of brooding meditation and adrenaline-fueled action, as this remote Wisconsin outpost sees a potential serial killer back in action during a brutal heat wave. Local law enforcement and a Vietnam vet turned crusading local journalist join into the investigation, as the community reckons with just how sinister a villain they have on their hands. Galligan writes swift, atmospheric prose that will keep the pages turning.

— Crimereads,
The Most Anticipated Crime Books Of 2021: Summer Reading Edition

Madison author, Galligan, has written another gritty, gripping addition to his series set in rural Wisconsin. Kick, as her name implies, strikes hard when she’s forced to. This is becoming one of my go-to series.

In Bad Moon Rising Galligan shows a masterly understanding of human nature and the troubled world we live in. Heidi Kick is a fully formed character that earns sympathy and respect. The heartland setting and the rising tension, shot through with a sparky sense of humor, makes for a truly terrific read.

Please check the appearances page for this year’s author visits.